an 'about me' that is exceedingly dense and comprehensive.

icon: "vivacious (my face with bold cat-eye makeup, with my head tilted down and to the side, looking at the camera with a wide close-lipped smile, hugging myself)"
There is a steep learning curve for most people to be close with me because I am so different from the default in identity, values, and language. 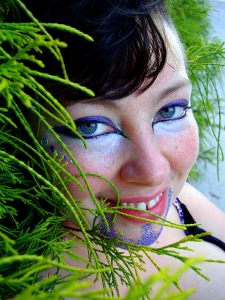 [image description]
I have pale pink-toned skin, blue hazel eyes with light brown bushy eyebrows, and very dark brown hair with silver in it. My eyes are long and fairly narrow, my nose is medium-sized and upturned, my mouth is wide with full lips, and there is a gap between my two front teeth. I am wearing cat-eye liner that is very dramatic, with violet on my upper lids and shimmery white under my eyes down to the curve of my cheeks. I'm also wearing silver and violet jewels on one cheek and a goatee made of violet glitter. I don't wear foundation or lipstick, so you can see freckles on my cheeks and that my lips are a pale cherry red. I am making eye contact with the camera and grinning widely enough that you can see my upper teeth. I'm leaning against a scaly bright green plant so that it frames my face in the foreground and background.

I'm also white, usually read as cisgender, college-educated, and non-disabled, and I'm open to people checking me on my privilege.

My core values are justice, respect, reverence/wonder, connection/compassion, imperfection/action, honesty, curiosity/questioning, transparency/openness, creativity, growth/change, & thoroughness. I'm curious, open, sensitive, resilient, creative, growth-focused, respectful, compassionate, and thorough. Also, often overwhelmed, fearful, unable/unwilling to read passive statements as active*, easily distracted, not fully present unless I make a deliberate effort (and sometimes I can't), often brashly overstate when I am relaxed, easily convinced that someone has no investment in me, and demanding of high levels of emotional skills from those I am close with.

*I won't take "I'm not sure that's a good idea" as "no, I don't want to go" -- I will ask until you say 'yes' or 'no' or 'I can't answer that' (unless the question is about sex or something I know you don't like doing, then I will take hesitation as a no unless you correct me). Making me try to guess or infer is unethical, in my opinion, and I will resist it. I spent many years putting all of my energy into reading people and trying to predict what they wanted and it is the most GIGANTIC DRAIN.

But probably the most difficult aspect is that I am very careful with and sensitive about language, especially regarding slurs. Most people don't see ableist slurs the way they do other slurs, so even the very nicest people will say things like [slurs under here]lame, stupid, moron, idiot, derp, dumb, imbecile, special or slow (as an insult), retarded, crazy, insane, psychotic, mental, spastic, blind/deaf (to mean not paying attention or being deliberately obtuse, or to mean any personality trait rather than literal physical trait)... And these are usually so very habitual for people that trying to unlearn them is very hard and results in having to fumble around trying to find an alternative, which makes people feel less than smart. And partly due to the constant demonization of the trait of thinking more slowly than average (which is not ACTUALLY a problem), this is scary, vulnerable, embarrassing, and uncomfortable. So essentially, trying to be kind to me is scary, vulnerable, embarrassing, and uncomfortable -- if people aren't already trying to weed out such words from their vocabulary, they're probably not going to want to be around me. I write about this a lot: slurs are still very harmful when they are aimed at a situation/action/thing instead of a person and we can't be close if you use slurs because it damages me & breaks my trust in you and slurs are both harmful and not expressive: say what you actually mean instead / TW: slurs.

I also have access needs that many people are not used to, because of my ADD-PI and auditory processing difficulties. I read lips and expressions to fill in the gaps in what I can make out from sound. If there is conversation happening I can't handle music with lyrics playing, even very quietly. I need to make plans for social in advance, partly because I have to plan everything in order to remember it and partly because I have to work myself up to being ready to interact (social includes any form of real-time communication including IM). Phone calls are usually torture for me but I can do them okay if I know the person's voice and speech pattern well enough. I often feel the need to explain when someone jokingly misunderstands. I can't bear to leave a potential misunderstanding hanging, even if it is very unlikely that they don't actually understand. I think people think I am humorless because of this but I can't stop, even though I am embarrassed that it seems like I am 'not getting it.'

The most important access need I have is understanding that I have a very glitchy memory and can't control this. I use photos and writing and google calendar as my memory, because the one in my head is almost useless on its own. If I forget something, it's not that it isn't important to me: it's that I don't get to decide what to remember or forget. I often don't respond to communication in a timely manner and may forget entirely, and this chance INCREASES when the communication is more meaningful because then I need to set aside more energy for it -- and I have to both remember it and have energy at the same time. This is part of why I love LJ so much -- it is expected to be asynchronous, so I don't feel the additional stress of 'should have responded already' (except with comments on my posts, but I'm working on that).

Art is deeply important to me. I consider art to be any creative endeavor done to express oneself, tell a story, or create beauty. Not all art is the same quality, because practice, knowledge of self, understanding of the world, study of technique, and study of audience all allow for a truer creation. BUT a little kid scribbling on paper with a crayon is JUST AS MUCH art as the oil painting of someone who has been doing it for 40 years and went to school for it. And there is NO VALUE in ranking one against the other because unless you are in the artist's mind you can't tell how true it is to their intent, which is the only measure of success. The art that goes up in galleries is a reflection of what a few privileged people think other people want to see. It is not a reflection of the best art -- in fact it is often bad art (the only bad art is art that uncritically reproduces oppressive ideology: it's not really art, but propaganda. it's everywhere in galleries and art museums.). I make art because I feel that each art piece, whether observed by someone else or not, is an offering to life itself. LJ is my primary source for witnessing art, in the form of what you all write.

I'm a very spiritual person but I avoid dogma as much as possible. That's why I am a Quaker; Quakers actually believe in structuring your own morality as well as holding equality as a core value. I am also an eclectic pagan because I am simultaneously nontheist and theist, and the deities I worship come from various pantheons. I was raised as a christian (though I took it way more seriously than almost anyone else I knew), and have read the bible cover to cover 3 times and parts of it upwards of a dozen times. I feel that meaning can be found anywhere -- I have used the dictionary for spiritual guidance. But I mostly find magic & meaning in plants, fungi (the internet of the forest), microbes, glittery/shimmery/glowy things, and glass. I do energy work fairly often and rarely pray.

Friendship is vitally important to me and if you consider romantic relationships or partnerships (including marriage) to automatically be 'more' than friendships, I will limit my investment in you (also I won't date you). I value highly skilled friendship and I'm always seeking to improve. Intimacy is a thing I deliberately create with my friends through intimacy practice and making sure I see them and/or communicate with them regularly.

I'm not an easy friend! but my friends have told me that I am trustworthy, compassionate, empathetic, generous, encouraging, insightful, creative, genuine, and growth-inspiring, so I think that I am worth the effort. Still, it's so much easier for someone to be comfortable with me if they are already careful with language and already self-educate on sex, gender, relationships, race, disability, etc.
Tags: add-pi, art, care and feeding of belenens, communication / words, friendship, graphics with descriptions, identity, lj my beloved home, photos, slurs, social justice / feminism, spirituality, the essential belenen collection
Subscribe
Previous
← Ctrl ← Alt
Next
Ctrl → Alt →
Previous
← Ctrl ← Alt
Next
Ctrl → Alt →