on the use of public bathrooms as a trans person: an illustration

icon: "Ma'at (a photo of one side of a brass balance scale, with a feather inside the bowl. The background is sky blue. On the bottom of the image, below the photo, is the word "Ma'at")"
CN/TW: anti-trans sentiment regarding use of public bathrooms.

I made an illustration: 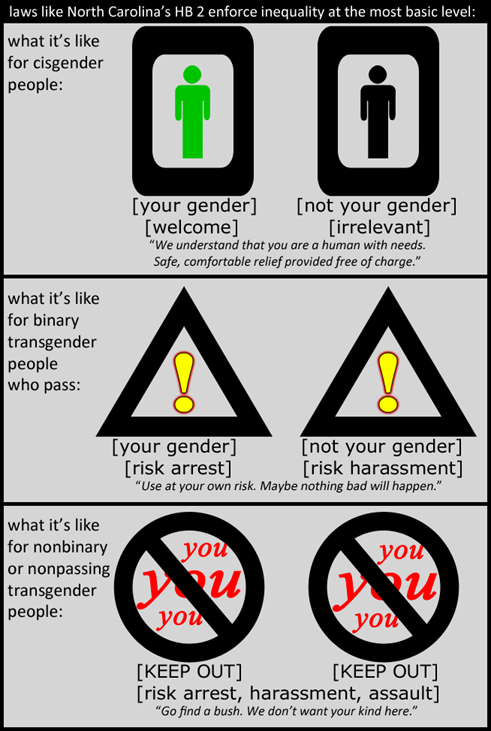 [image description]
[image: a graphic with words and symbols in three panels.
At the top is printed: "laws like North Carolina's HB 2 enforce inequality at the most basic level:"

The first panel has the words "what it's like for cisgender people:" and two black rectangles with peg-shaped people in them. The first rectangle contains a green peg-person, and underneath it in brackets are [your gender] and [welcome]. The second rectangle contains a black peg-person, and underneath it in brackets are [not your gender] and [irrelevant]. Below these is a line of text in quotes and italics that says, "We understand that you are a human with needs. Safe, comfortable relief provided free of charge."

The second panel has the words "what it's like for binary transgender people who pass:" and two black triangles with red-outlined yellow exclamation marks in them. Underneath the first triangle in brackets are [your gender] and [risk arrest]. Underneath the second triangle in brackets are [not your gender] and [risk harassment]. Below these is a line of text in quotes and italics that says, "Use at your own risk. Maybe nothing bad will happen."

The third panel has the words "what it's like for nonbinary or nonpassing transgender people:" and two black circles with a diagonal line (the 'no' symbol), covering the words "you" repeated in red. Underneath both in brackets are [KEEP OUT] and [risk arrest, harassment, assault]. Below these is a line of text in quotes and italics that says, "Go find a bush. We don't want your kind here."]

Also, it was Trans Day of Visibility yesterday, and my first thought was "oh everyone knows I'm trans." But maybe not, so let me tell you: I am an agender/genderfree trans person.

I am willing to be your token friend as an example to any transphobe you want to talk to about transness, assuming you are trying to help them relate. Lots of people are unaware that they know a trans person, and people are massively terrible at empathizing without a personal connection, which is why it is important that cis people realize that they know a trans person. Even a once-removed connection is more than most people realize they have. So if you are a cis person and someone says to you something like "lolz that person is bad at gender, look at their xyz!" You can say, "that might be the perfect gender expression for them; not everyone is the same. One of my friends is trans and I respect their right to throw out gender norms."
Tags: art, gender, graphics with descriptions, social justice / feminism
Subscribe