the fictional characters I feel most affinity with: Chrysoberyl, ?, Maleficent, Joan, Alice, Sylvari

lusimeles: which fictional character do you feel the most affinity with?
Books: Chrysoberyl from Brain Plague and the unnamed protagonist from Biting the Sun.
Movies: Maleficent from Maleficent and Joan from Playing by Heart.
Video Games: Alice from Alice: Madness Returns (also the Lewis Carroll books but less so) & the Sylvari from Guild Wars 2.
If you added these characters together, you would get pretty much exactly me. The only thing missing is a profound love of color. 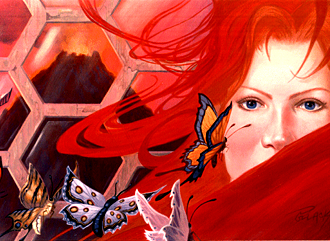 [image description]
Image: cover art for "Brain Plague." In the foreground on the right is a person with pale ivory skin and vibrantly, shockingly red hair and blue eyes. Their hair is flying in front of their face and behind them, and as it drifts behind them it turns into streamers or ribbons. Behind them is a honeycomb lattice of red stone, with glass blocks filling up each hexagon. Through the glass blocks there is a volcano that is smoking as if it is soon to erupt, and the sky is red. In the foreground in front of all of this is a trail of butterflies and moths, fluttering toward the face of the person from the bottom left. The predominant color is RED and it gives a sickly, almost menacingly hot feeling that contrasted with the light, fluttery butterflies and streaming hair makes one feel off-balance. Art is by David M Switzer.

Chrysoberyl (Chrys) is an artist, a 'colorist' (because paint is obsolete in a digital world) who chooses to adopt a colony of sentient microbes to live in their brain. Throughout the novel Chrys engages with ideas of ethics that I think most people do not give a crap about, but I relate very intensely. This gets Chrys into a LOT of trouble, and not the cute kind. Also, when given a choice of any type of body imaginable, Chrys chooses to look their own age and be massively strong, not caring at all what that looks like or that most people will see a super-muscular woman as unattractive. Chrys cares more about creating art than anything else, and makes art that either comments on reality in a way that is too truthful to be appealing, or expresses a kind of connection that is unique and profoundly appealing. Chrys also is good at empathy and when they realize they're being judgmental about something (such as the way a particular kind of sentient robot looks) they work on changing their attitude. 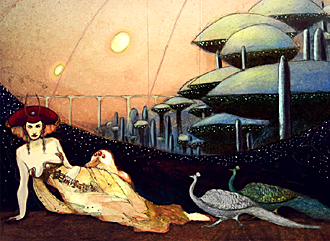 [image description]
Image: illustration for "Biting the Sun." In the foreground a slender white person lounges on the ground, propped up on one arm with the other draped over their hip. They're wearing a wide red velvet headdress with a u-shaped hornlike ornament at the forehead, and a filmy yellow dress with a bronze metalic part cupping their breasts, which are mostly bare. Just behind them peering over their hip is a three-eyed duck-billed white-furred creature. Walking towards them are two peacocks, one of them albino. Behind all this is a sweeping darkness with starry spots on it: a wall with a gigantic round window. Outside the window you can see many mushroom-shaped buildings, fading into the distance. At the horizon is a transportation track on extremely high beams, and arching over it all is a dome, only marked by the join lines. Outside the dome are two suns. Art is by Celine Loup.


The unnamed protagonist from Biting the Sun is someone who I strongly identify with because they reject hedonism and seek to be themselves even though this makes them a pariah. They also have a terribly rude pet, and they are deeply moved by the act of caring for plants. They set out merely to change their own life, but others are drawn to them and they share what they know as they can.

[image description]
Image: screenshot from the movie "Maleficent." A person (played by Angelina Jolie) with giant feathered clawed wings (like a cross between bird and bat) and two thick curling horns on their head is flying rapidly towards you-- the background is a blur. The person's face is wild, mouth wide open in a snarl and eyes narrowed, brows lowered.


Maleficent is me in so many ways; if I had to choose only one character it would be them. I am also a winged, horned creature and I also had my wings torn off but got them back. I also was betrayed by my first lover for the sake of power under the patriarchy. I love the land deeply and will love anyone who loves it too. And I feel that I am often seen as the villain, and I know that I am often seen as scary (because people have told me so), despite having strong ethics and being loving. And I would lose those I love rather than keep them to their detriment. 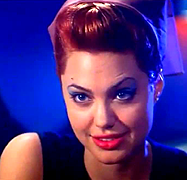 [image description]
Image: screencap from "Playing By Heart." Joan (a character played by Angelina Jolie) is looking towards someone off screen with a teasing expression -- one eyebrow raised and their forehead tipped forward. They have bright coppery red hair worn in a pompadour with a pink kerchief on it. Their makeup is vibrant and matches the lighting, which is glowing cobalt blue (like their eyeshadow) and rose (like their lips).


Joan from Playing By Heart is extremely open and honest and falls in love without reservation and without care for how difficult navigating the connection may be. They have a grumpy one-eyed cat that is easily startled but which they love. They offer chance after chance for the ones they love to connect with them. 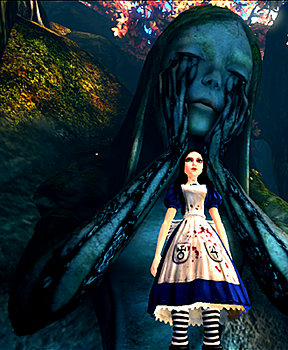 [image description]
Image: screenshot from the game "Alice: Madness Returns." In the foreground stands Alice, wearing a blue dress with a white blood-spattered apron. On the pockets of the apron are symbols: one that looks like an inverted female symbol and one that looks like a 4. Under the dress Alice wears a petticoat and horizontally-striped leggings. Behind Alice is a huge blue-grey stone statue embedded into a hill: a symbolic (prettier) Alice with both their hands on their cheeks and their eyes closed. From their closed eyes streams glistening black ooze (called 'ruin'). In juxtaposition, the rest of the hill looks utterly vibrant, lush and full of colorful leaves and moss, and at the very top of the image you can see a bit of clear blue sky and sunlight.


Alice from Alice: Madness Returns is the darkest part of me. That game shows the difficulty and terror and illogic of dealing with the fallout from trauma, and Alice faces it as a warrior. It is so real that it's scary. There's so much beauty and so much horror. It reminds me of the dreams and visions I had when processing the sexual abuse I endured as a child. There is so much symbolism that I find deeply fascinating, and while it deals with the creepiest stuff, it does so in a way that feels true to life. This game is the closest thing I have ever seen to my dreamscape. 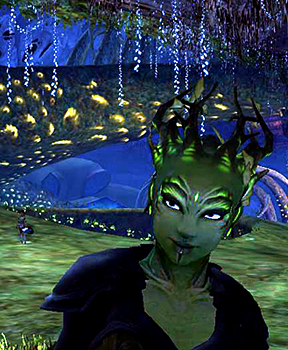 [image description]
Image: screenshot from the game "Guild Wars 2" of my character Belenen. Belenen is a sylvari -- a plant that is shaped like a human. Belenen has green-blue eyes and sage-green skin, with dark green and phosphorescent green accents. Above their eyes are two layers of leaves which look like eyebrows or butterfly wings, and there is a diamond shape between. On top of their head are many short, thick branches sort of like horns. They have long narrow eyes, a wide nose, and full lips. Under their lips is a bright spot and then a dark stripe running down their chin, narrowing to a point at the end of the chin. On their chest you can see the plates of leaves come together like collarbones, and they're wearing dense leathery armor. Behind Belenen is a massive tree glowing with phosphorescent orange fungi in arched plates and above them is a branch of another tree, covered in green vines and dripping with long streamers of white-blue and pink-purple blossoms.

The Sylvari from Guild Wars 2 are not a single character, but their symbiotic relationship with plants is something I deeply resonate with. I feel kindred with them. From the in-game description, "Sylvari are not born. They awaken beneath the Pale Tree with knowledge gleaned in their pre-life Dream. These noble beings travel, seeking adventure and pursuing quests. They struggle to balance curiosity with duty, eagerness with chivalry, and warfare with honor. Magic and mystery entwine to shape the future of this race that has so recently appeared." They fight against corruption of the dream, a state of oneness with nature they experience before they bud off into mobile creatures.